Anyone who knows me, knows that I’m obsessed with Frida Kahlo. But the last two months haven given me such unexpected Frida Kahlo magic… that I’m still in disbelief.

Last month I got to attend Frida Kahlo: Appearances Can Be Deceiving, the largest U.S. exhibition of Frida’s work in the last ten years.

And just yesterday… for the first time ever I got to hear Frida’s voice.

Cray… wonder if it’s really her voice. But as always, I’m obsessed with the obsession.

Will you be attending? 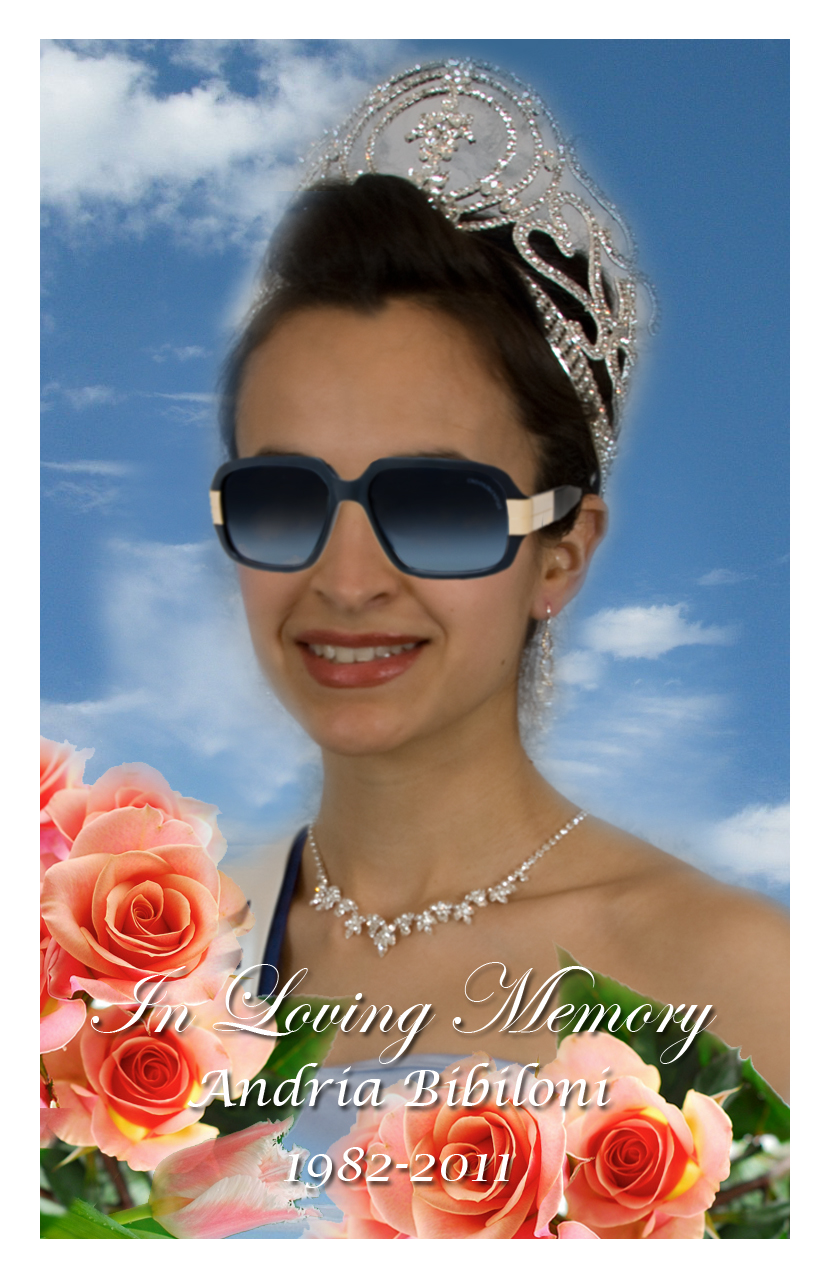 Andria Bibiloni, 28, of New York, ceased to exist on Mar. 23, 2011 in Philadelphia, where she lived since 2000.  A visual artist and educator, she strove through her work to facilitate a dialogue about sociopolitical and interpersonal issues. Known for riding her Blasterbike, 2007, in the streets of Philadelphia, her departing wish was to be displayed riding a bigger, louder, and heavier soundblasting vehicle.  Beth Beverly of Diamond Tooth Taxidermy will be handling the preparations for the viewing, which takes place at the Rotunda in University City on Sunday March 27 from 3-5 pm.  Guests are invited to stay for refreshments. 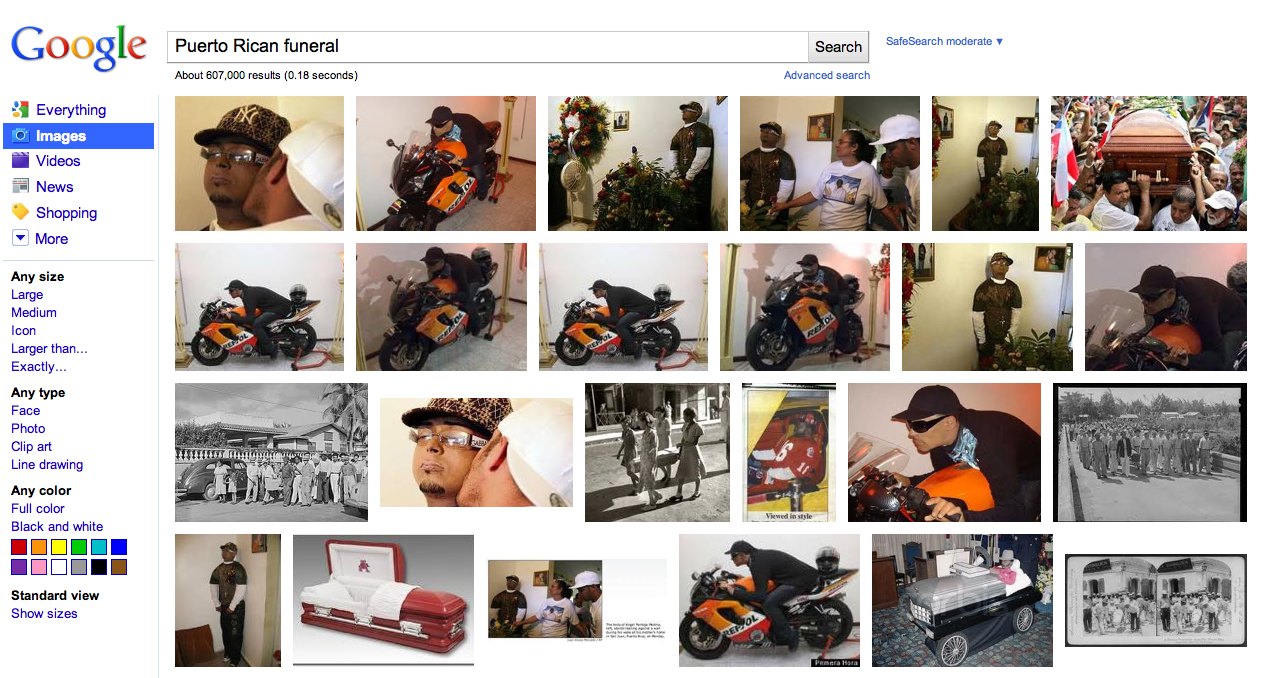 Have you ever Googled Puerto Rican funeral? If you haven’t then I suggest you do.  And if you live in Philadelphia or in the surrounding area, you should attend Andria Morales and Beth Beverly’s collaborative performance Last Ride.

LAST RIDE is a collaborative performance-based artwork by Andria Morales and Beth Beverly.  Inspired by Puerto Rican funeral celebrations and taxidermy traditions respectively, the artists have found a common interest in death.  Using the Rotunda’s church-like interior as a backdrop, the artist’s work will invite viewers to experience mourning as a celebration.

Andria Morales (formerly Andria Bibiloni) explores the divide between art representative of culture, and art produced from within a cultural community. By immersing herself in situations where cultural identity is consequential, she aims to provoke viewers into a confrontation and analysis of their own preconceptions. The resulting work is multidisciplinary, consisting of mixed media sculptures, self-portraits, performance based videos, and site-specific installations.  Andria Morales’s work has been exhibited at Labor K1 in Berlin, Virginia Commonwealth University in Richmond, Projects Gallery in Philadelphia, the Ice Box in Philadelphia, and the CUE Art Foundation in New York. In 2008 she was awarded a Joan Mitchell MFA Grant for her work in mixed media sculpture and installation. Andria is currently a resident in the 40th St. Artist in Residence Program, and teaches at Tyler School of Art.

Beth Beverly is a State- and Federally-licensed taxidermist who has a BFA from Tyler School of Art and graduated from the Pocono Institute of Taxidermy with high marks. Ms. Beverly is passionate about using every part of an animal and being thankful for the ultimate sacrifice each creature makes to land both in her studio and on her plate. She has won numerous awards for her taxidermy creations, including Best in Show at the fifth annual Carnivorous Nights taxidermy contest in New York.  Beth’s work has been exhibited at Bahdee Bahdu Gallery, James Oliver Gallery, Wilbur Vintage Boutique and has been featured in a plethora of fashion & art blogs.

Mayra Ramirez makes my heart pitter patter….
(here is a repost of one of her latest posts on her blog Hella Breezys)

It’s hard for me to fully express my disappointment and frustration with Arizona’s law makers… last week they passed HB 2281 witch bans “Ethnic Studies” in the states K-12 grade classrooms. I cannot emphasize how important it is to be able to learn about the history of our peoples, of our ancestors, and to be able to find pride and empowerment in that. It’s such a sad and scary time in both Arizona and the country. Here is a great article about HB 2281 that I found very interesting…

So now I want to share my favorite Save by the Bell episode where Slater finds his Chicano Power!!! I feel it’s a great example of why having Ethnic Studies in our classrooms is so crucial…

FUCK ARIZONA’S ETHNOCENTRIC LAWS… WE NEED TO FIGHT FOR THE RIGHT TO LEARN OUR HISTORY, OUR CULTURE AND THE ACCOMPLISHMENTS OF OUR RAZA… TIERRA, JUSTICIA, Y LIBERTAD!!!

A recent tumblr find, led me to the remarkable work of Stacyann Chin.

I really need to get to Chile…  The incredibly talented curator and artist Menru Silva Avila, just informed me that my work is featured in II VVVienal de Video Arte Valparaíso 2010! 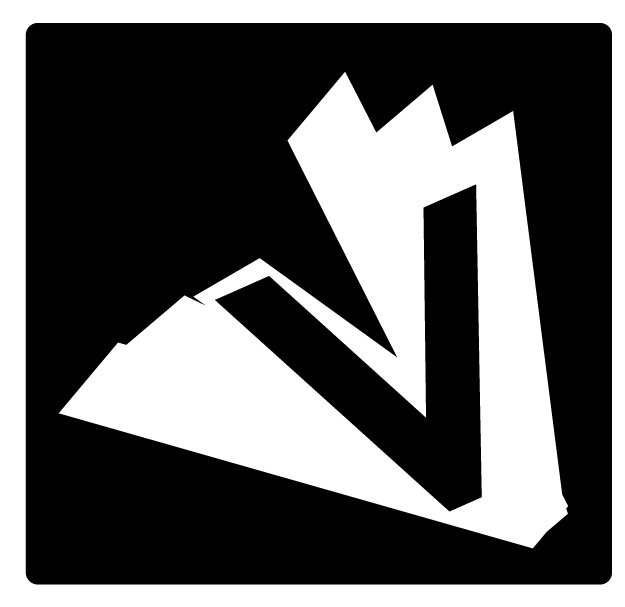 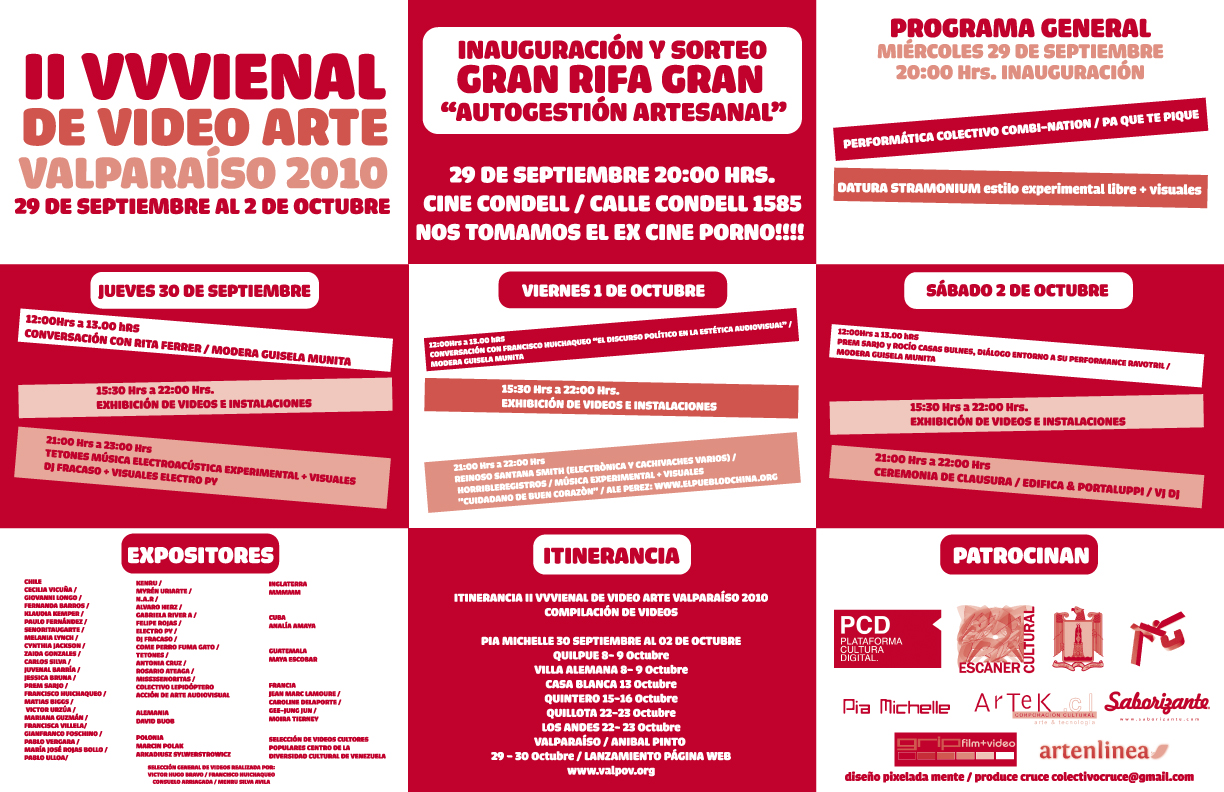 My beautiful and incredibly talented cousin Eleanor Dubinsky has just released a new album entitled sea inside. I bought my copy last night and listened to it over and over… eventually falling asleep to her voice. My favorite tracks on the album are Missouri Sky and Estoy Sola.

sea inside is available on iTunes for $6.95.

In addition to singing, Eleanor plays cello, guitar and hand percussion. She writes in English, French, Spanish and Portuguese and her international background and ease with many languages and cultures enhance her personal appeal as an artist to people from all over the world. Eleanor independently released her debut EP “Us” in May 2009 and is currently finishing her debut LP for release in 2010.

Check her out at EleanorDubinsky.com.

As you doggedly pursue, chase, and snap at the heels of your Self, you do so knowing there is no chance you will ever catch up. For each of us, throughout our individual lives, we will be ever distant from knowing our own selves. When a person pursues his or her Self in an aggressive, determined way, the resulting hyperactive sensibility allows for a greater adaptability and sensitivity. This flexibility can be useful in contemporary human life, but only to a certain extent.  It is also due to the fast-paced nature of today’s engineered environments, that there is a strong tendency (especially among young people) to go to extreme lengths in order to sustain within their own lives the hyperactivity and intensity they witness in popular culture and media. Consider the called-for constant reachability via cell-phones and laptops, as well as many other forms of expedition in our ‘lived-in’ world. These accommodations range from aerodynamics to ATMs. As many workers in today’s professional world simultaneously lament and extol their parasitic relationships with a Blackberry or other such Pocket God, I, too, have at many times felt chained to my laptop (i.e. the Internet), fearing I would miss something absolutely critical. Unfortunately, the fact that missing anything important has not happened for the most part, hardly affects the worry and anxiety that it might happen.

Yet still, it seems, this once motivating anxiety is becoming a repressed urge, one which is less and less a bother, the more my environment becomes one seamless, semi-omniscient “news” feed. On the evening of President Barack Obama’s Address to the Nation, Maya Escobar recorded “Obama Tweet: How a New Generation Gets Their Information.” In this video Escobar documented a particular event, an important cultural event, one which incidentally brought the use of Twitter to the fore in popular culture.

Obama Tweet: How a New Generation Gets Their Information, 2008

I was with Escobar on this evening and was struck by the depth of her interaction with the digital realm. She was sitting in front of a T.V. broadcast of the speech, while she was also further mediating that media via her computer, on which she was following Twitter and CNN.com’s coverage of the event. Beyond all that, Escobar was creating her own real-time, indexical document of the event on television along with CNN and Twitter as instantaneous forms of annotations to the President’s speech. Escobar was watching, sitting one more stage removed, behind the lens of a video camera. Because of the way in which she layered the television screen the computer screen and then the interface of any viewer’s monitor, Escobar has effortlessly choreographed a multi-layered, engagement with the very most current of events. However, though I may have somewhat qualified and rationalized instant-communication tools, I still believe there must be a deliberate effort to complement those socially-prescribed media with other, independent forms of digital exchanges. While I do believe in the great social potential of our rapidly advancing communications media, my work seeks to push and pull on parts of these evolving global ‘informachines,’ in an effort to challenge the omnipresence of commercial media.

That sort of layering of non-dimensional spaces is unique to the contemporary world, with the inception of digital technologies, and this collage-like aesthetic is of great interest to the work of Maya Escobar, as much as it is to my own. Although, unlike the deceptively referential works of my counter-part, in many of my works, I use and refer to popular media sources and specific Internet sites indirectly and rarely with any superficial visibility. It is with great deliberation and much hypothesizing that I curate my works in the manner in which I do. I intend my works to avoid specificity and leave wide-open their readings to a much more self-guided analysis by viewers. In the piece “Look Out,” the projected video came directly from YouTube. I simply cut off the last second of the original video, thus shortening it to 17 seconds. I then prepared it as a video-loop for its installation underneath a staircase at the Mildred Lane Kemper Art Museum. Because of its placement, where it fills a theretofore, unaddressed space, it is as though the rolling image is part of the museum structure itself. The particular clip, which I chose after viewing dozens of similarly tagged videos (‘storm,’ ‘tree,’ ‘willow,’ and ‘weeping’), was selected for very specific compositional reasons; reasons which are the very same principles of design taught to anyone working in commercial design or the visual arts: complimentary colors, rule of thirds, dynamic composition and varied textures, to name a few. Because of my focused selection process, this video, although created for very different (and unknown) reasons, still fits very well into the installation space as a deliberately designed, and potentially permanent use of what is otherwise a neglected space. The video became part of the stairwell. By existing within a predetermined, architectural frame, it became part of the space, as opposed to sitting on the surface as a painting does.  This projection did not exist in the way that many (most) installations do: as obvious alterations or obtrusive interjections into a space. This work asserts itself as a physical part of the space, as the projector beams through from behind the scrim in the stairwell. It also assumes a living presence, as it reiterates itself, by many reflections and refractions, split and scattered, bouncing around the main hall of the museum. The video functioned as a decorative element but also an illusory window to an outside world, whereas, the space without that piece is simply a pane of glass that looks into the shadowy crotch of a stairwell.  I do not mean every square inch should be taken up for some sort of visual activity or illusionary window. Simply, this work proposes how our constructed spaces, in this case a venue for art viewing, might be reinterpreted. Insofar as, a corner can conceivably become a window, as illusory and impermanent as my particular interpretation may be. 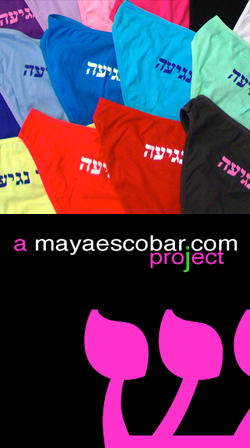